There were few stretches of water with a greater density of industrial sites than the Doagh River. Most started off as small-scale enterprises run by families and a handful of employees … 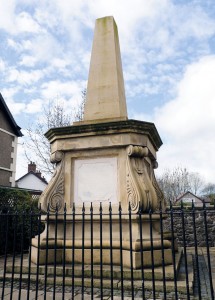 … but in the course of the nineteenth century larger mills were established employing hundreds of workers. There was a mill at Doagh from at least the middle of the eighteenth century and probably for over a hundred years before that.

The first mill was probably a corn mill, but by 1760 there was also a tuck mill (a woollen mill) at Doagh. Bleach greens and beetling mills were also established and the linen industry became an important part of the local economy.

One of the most important figures in the history of Doagh, and a true entrepreneur in Ulster’s manufacturing history, was John Rowan.

A former pupil at William Galt’s Sunday school and avid browser of the library’s books, Rowan operated the Speedwell forge, which he established in Doagh in 1824. Here he was assisted by his sons and a small team of skilled workers. In the Ordnance Survey Memoir for Doagh it was noted that:

This establishment is kept in the neatest order and exhibits considerable economy of time and labour. All manner of fittings for machinery, steam engines, farming implements and ordinary smith work are executed here in a superior manner. Mr Rowan is a self-taught mechanic, and all his workmen (including his three sons), 16 in number, have served their apprenticeships to him.46

In the early 1830s Rowan began to devise and build a steam-powered road vehicle. The first mention in the press of this steam coach dates from February 1835 when it was reported that Rowan had ‘just completed a Steam Coach, on an entirely new principle’.47 It was believed that the steam coach would be ready for trial around the middle of April and would hopefully commence road journeys immediately afterwards. It was brought to Belfast on 1 January 1836 where it drew huge crowds of amazed onlookers. On 5 January Rowan drove it through the streets of Belfast, again to great excitement with a band adding to the merriment. Unfortunately for Rowan, he found potential investors more interested in the railway transportation and failed to secure their support.

Despite this disappointment Rowan continued to develop his business and in January 1839 added a foundry to his operations at Doagh.48 Through advertisements placed in the Belfast Newsletter, it is possible to chart the engineering developments pioneered by the Doagh Foundry. For instance, on 23 July 1841 there appeared an advert for ‘improved thrashing machines’ which the firm manufactured and was able to fit up at the shortest notice. The advert stated that these were popular in this part of the world because they were easily worked and did not go out of repair. Readers were informed that representatives of the firm would be at Cunningham’s Hotel, North Street, Belfast, every Friday, and at Mrs Brangan’s, Ballymena, every Saturday, to take orders for the various articles made at the foundry.

On 1 March the following year the Doagh Foundry advertised a ‘portable steaming apparatus’ which was available for inspection at their yard. This could be used for steaming food for cattle and ‘for all manner of domestic usages’. On 13 October 1843 an advert appeared for an ‘improved steaming apparatus’, which would be particularly useful for small farmers and dairies, and cost £6 10s. This used only a small quantity of fuel and steam could be raised in 10 minutes with the steaming completed in another 20 minutes. There were agents for receiving orders in Downpatrick, Newry and Hillsborough, while an example could be inspected at the offices of the Northern Whig in Belfast.

One of the most important inventions was announced on 25 July 1844. This was ‘Rowan’s patent axle’ and it was advertised to ‘Engineers and Directors of Railways, Mill Owners, Coach Proprietors, and all parties using Revolving Machinery of any description’. A patent for this ‘newly-invented anti-friction axle’ had been taken out in the UK, France and Belgium, and there were agents for it in London and Belfast. The advert included a testimonial from the Engineer to the Ulster Railway, John Gordon, who, having carried out a number of experiments on the axle, expressed his admiration for ‘this very ingenious and important invention’.

At the beginning of 1846 Rowan relocated his business to Belfast where he died in January 1858. He lies buried in an unmarked grave in Ballylinney old burying ground. In February 1859 it was announced that several friends of the late John Rowan had proposed erecting a monument to his memory at Doagh and a committee had been formed to take this proposal forward.49 In August 1860 a special inauguration ceremony for this monument took place which attracted thousands of spectators, many of them travelling from Belfast.50 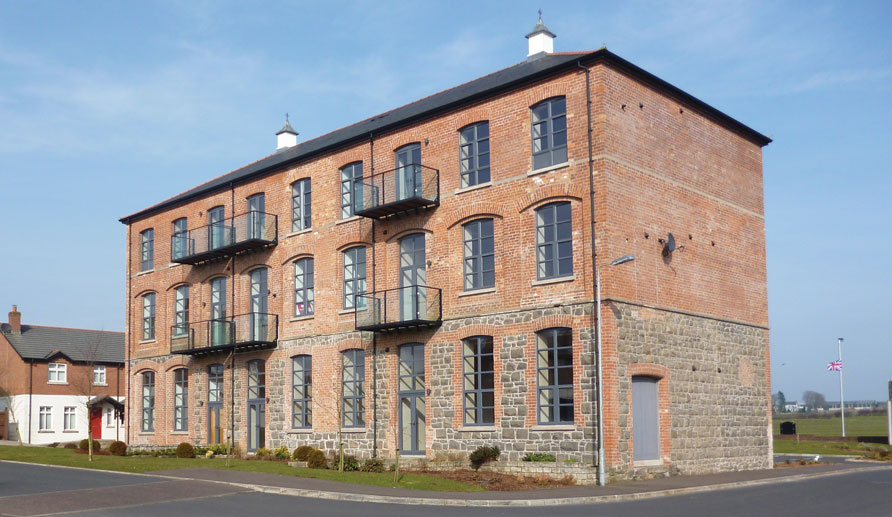 In the mid nineteenth century, on the site that had been occupied by Rowan’s foundry in Doagh, a spinning mill was established. It appears in Griffith’s Valuation of 1861-62 as the Holybank Spinning Company, but later became the Doagh Flax Spinning Company. This provided considerable local employment, especially for women. A large new mill, four storeys high, was built on this site c.1920.51 In the 1940s, due to flax shortages as a result of World War II, synthetic fibres were introduced to the production process. This proved a success and a new factory was built on the Kilbride Road in the early 1950s.

At their busiest, the two mills were employing 550 people. However, changes in the market resulted in the closure of the premises on the Kilbride Road. The Doagh mill continued to operate, but it too closed in the early 1990s.52 The mill building has now been converted to apartments.

Cogry Flax Spinning Mill was established in 1845 and was particularly associated with the McMeekin family. It was William McMeekin who acquired the business around 1879 and he was succeeded by his younger brother Adam. The McMeekins’ home was called Invermuir, named after Adam McMeekin’s three children – Ivan, Vera and Muriel. In Bassett’s Directory of County Antrim of 1888 the following account is given of Cogry Mills:

Flax spinning, as an industry, was begun at Cogry in a small way about the year 1845. … Since Mr McMeekin came into possession much of the machinery has been renewed, and the buildings practically remodelled and extended. The premises, altogether, comprise about 30 statute acres, including Mr McMeekin’s private residence and ornamental grounds … About 400 people are employed at the Cogry Mills. The greater number live in houses belonging to the concern, and are educated at a National School of which Mr McMeekin is patron.

Many of the workers lived in the now demolished Cogry Square. To provide entertainment for the workers, a cinema, known as The Picture House – was opened in 1919. This had seating for 400 people and included a stage for concerts. It proved hugely popular, not just with the mill workers, but with people throughout the district. An accordion band, named the McMeekin Memorial, after the mill owner was also established. Though Cogry Mills was one of the most progressive mills of its day – its early use of electricity was particularly innovative – it too was the victim of changing markets and closed in the late 1950s. The mill buildings continue to be used by an engineering firm.