In spite of the many industrial sites in and around Doagh, agriculture remained a central part of the local economy.

Isaac Lindsay at work in the fields (click to enlarge)

The principal landed proprietor in the Doagh area was the Marquess of Donegall, one of the most extensive landowners in Ulster. After he built Fisherwick Lodge at the beginning of the nineteenth century, Lord Donegall began to take more of a direct interest in the Doagh portion of his estate, introducing advanced agricultural techniques to the lands here. He purchased some long-horned cattle from a leading English breeder. Some of these were fattened at Doagh on turnips grown there.

In the early 1820s the Marquess was in serious financial difficulties. In order to alleviate their monetary worries, the Marquess and his son began to issue leases for lives renewable forever in return for large down payments. It had been Lord Donegall’s practice to issue leases for lives prior to this, but by making them ‘renewable forever’ these were in effect perpetuity leases that would never expire – ‘eternity in parchment’ was how one contemporary described them. Tenant farmers were more than eager to get their hands of these leases for the security of tenure it gave them.

In the early nineteenth century the drive for agricultural improvement resulted in the creation of a number of local farming societies. One of these was in Doagh and it was founded in 1818. To begin with it was independent from any other, but later it became a branch of the North East Society. When the latter body folded in 1836 the Doagh Farming Society became a distinct body once again. In 1839 James Boyle of the Ordnance Survey wrote that there then 45 members and the Society organised a ploughing match in the spring and a cattle show in the autumn, with prizes awarded to the successful competitors. Boyle was full of praise for the Society:

This society continues to prosper. It efforts have in many respects been most beneficial and very perceptible, but particularly in the great improvement which has taken place in husbandry. In the introduction of systematic farming the soil has been rendered more productive, the cultivation of green crops more general, and more attention is now paid to the rotation of crops, to the breeding of cattle and to domestic and rural economy.53

The events organised by the Doagh Farming Society provided welcome opportunities for farmers to fraternise, share ideas and techniques, and have an enjoyable day out. Usually they finished with a dinner in the inn in Doagh. 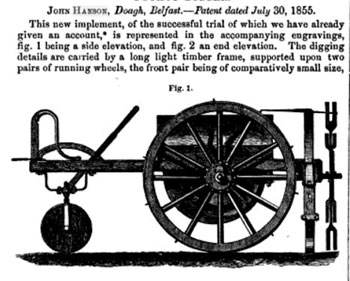 Many of the agricultural implements used by the farmers of the area were produced at John Rowan’s forge. Another important invention was the work of John Hanson of Doagh who created a device for ‘for digging or removing potatoes from the earth as a substitute the ordinary hand fork the object the more rapid and economical of the roots’. The implement, which was pulled by two horses, was described as ‘a light open timber frame supported on four running wheels the motion of the axle being applied to the driving of an arrangement of rotatory digging forks’54 Hanson took out a patent for it on 30 July 1855.55

Not long afterwards, and based on his previous invention, on 29 August 1855 a new land cultivator was patented by John Hanson of Doagh. This device was described as being ‘designed for effecting various agricultural operations, more particularly the disintegration and working of the soil’.56 The effectiveness of these implements was based on drill husbandry, itself an indication of advances in agricultural practice. 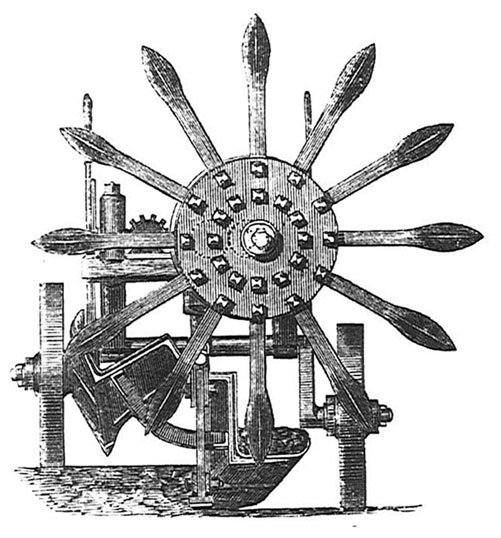