A case study of the Charman family

The 1901 census provides census provides the first opportunity to take a detailed look at the inhabitants of Doagh. Along with the 1911 census, it is available for free on the website of the National Archives of Ireland.

She was resident in house no. 22 in the village of Doagh, along with her father Jonathan, a 43-year-old retired schoolmaster, who had been born in England, her 13-year-old brother Alexander A., who had been born in Jersey. Also present was Jonathan Charman’s 40-year-old wife, Martha, a native of Kilkenny, who was initially assumed to be the mother of the two children, though this did not turn out to be the case.

Charman is an extremely rare name in Ireland, and we know from the census that Jonathan Charman was himself not a native of the island. Apart from the family in Doagh, only two other Charmans appear in the 1901 census, one in Belfast and the other in County Dublin (both born in their places of residence in 1901); one was married and the other was a widow.

In the 1911 census there were 10 Charmans, but Jonathan and Martha were not among those listed. However, Alexander was boarding with the Webb family in Annesley Street in north Belfast and was a clerk in a flax mill, while Annie was resident in a boarding house in Donegall Square East, Belfast, and was a ‘scholar’, which meant she was in education somewhere.

On the assumption that Jonathan Charman had died some time between the two censuses being taken, a search was made for information on his death. Checking the index to testamentary records created by the Public Record Office of Northern Ireland (www.proni.gov.uk), it was noted that letters of administration relating to the estate of Jonathan Charman were granted to his widow Martha on 23 June 1902. Jonathan Charman was noted as having been ‘late of Doagh’ and an ‘army schoolmaster’. He had died on 21 April 1901 – a mere three weeks after the 1901 census was taken.

The search for more information on this continued with a closer examination of the actual 1901 census form for the Charman household. This can be downloaded as a PDF from the website of the National Archives. In the column headed ‘Where born’, it was only necessary to state the county or city for those born in Ireland, and the country for those born outside it. However, it was often the case that fuller information was provided than required.

Looking carefully at the actual household return for the Charman family, it can be seen that Jonathan’s place of birth was originally entered as ‘Windlesham, Surrey’, but this has been crossed out and replaced by ‘England’. This also occurred in the case of Martha’s and Alexander’s places of birth, though it has not yet been possible to decipher what was originally written alongside their names in the ‘Where born’ column. 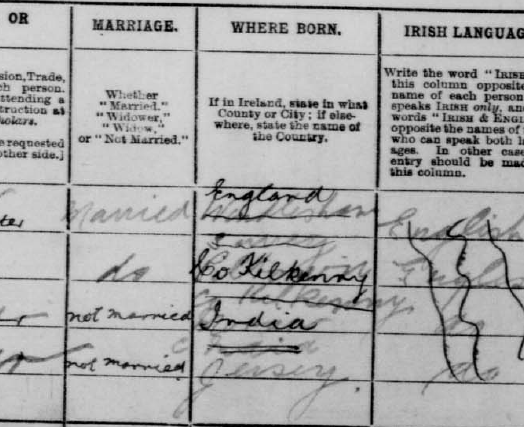 The website FamilySearch (www.familysearch.org) includes free information drawn from a wide range of different sources, including the Irish civil registration indexes to births, deaths and marriages. We noted that the marriage of a Jonathan Charman was registered in the superintendent registrar’s district of Dublin South in the third quarter of 1899.

There was no immediate reason to suppose that this record was of relevance to the Doagh family, but curiosity requiring satisfaction, this was pursued further. Among the records available on the website Irish Genealogy (www.irishgenealogy.ie) are registers of Church of Ireland churches in Dublin. A search of this website revealed that Jonathan Charman married Martha Cunningham in Rathmines Church of Ireland on 18 September 1899.

It is also possible from this website to download a copy of the actual marriage record. It is interesting to note that Jonathan Charman was a widower and an army schoolmaster. He was then resident in Palace Barracks, Holywood, Belfast, and his father was also called Jonathan and he was a steward. Martha Cunningham was the daughter of Robert Cunningham, a schoolmaster and she was resident in Rathgar Road in Dublin at the time of her marriage.

What had brought the two together is a question that is not easy to answer. However, we now know that Martha Cunningham was not the mother of the two children in the household in Doagh in 1901.

Returning to the FamilySearch website, we carried out more checking for Jonathan Charman. We were very interested to find that a Jonathan Charman was baptised in Windlesham on 10 May 1857, the son of Jonathan and Jane Charman. This matched exactly what we had been able to establish about the Doagh resident in 1901. 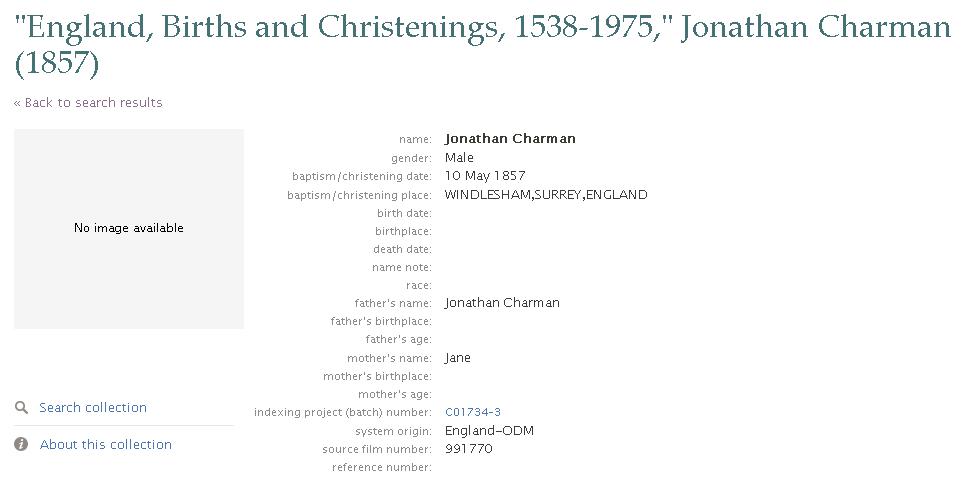 The FamilySearch website also revealed a record of the birth of Annie Charman in India. She was born on 7 April 1884 in Morar, Bengal, the daughter of Jonathan and Sarah Ann Charman.

What became of Martha Charman? A search of the Ulster Historical Foundation’s civil marriage database for County Antrim (www.ancestryireland.com) revealed that on 8 July 1910 she married Robert Reid, a blacksmith in Doagh. The marriage took place in Ballylinny Presbyterian Church. The 1911 census showed her living with her new husband in Doagh. She was aged 52 and he only 40. 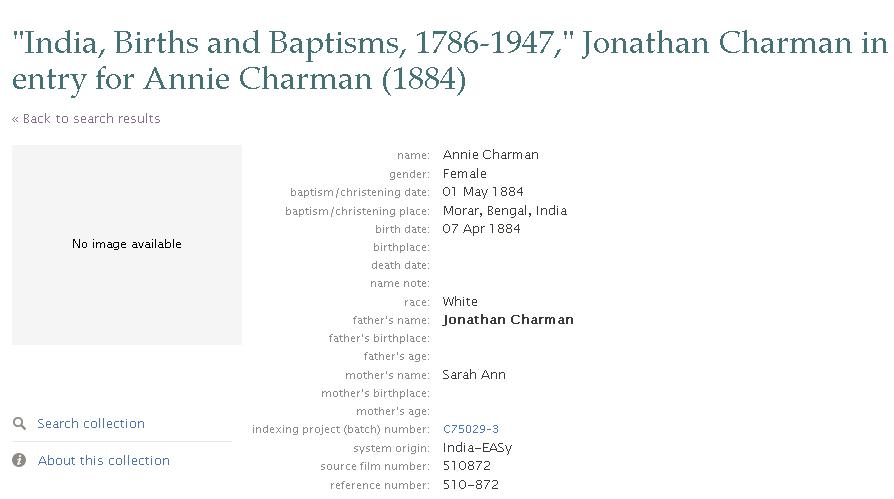